James Panton (Oxford) and I convened an interdisciplinary seminar at Oriel College, University of Oxford in 2010:

An interdisciplinary seminar on ART AND ACTION, or the Politics of the Sixties’ Cultural Revolution. 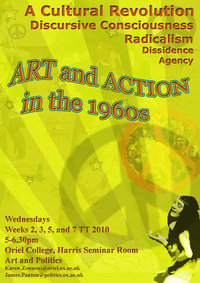 The blurb:
The Sixties are the nexus of the challenge to authority in the 20th century. Whether it be in political, cultural, public or private spheres, polarities are upset by a questioning of every stratum of power. Art seems to play a crucial role in subverting the conventions on which the western world relied. The US and the UK bear witness to a thought-provoking, at times scandalous, art scene.

But to what extent can we relate the political upheavals that climaxed with “68” to the messages sent out by the marginal culture makers of the 1960s? Is radicalism in art a reflection of political thought, or does it in fact pre-empt political radicalism? Conversely, how are we to read “art for art’s sake” in such a highly political context? Does art have to have a transparent agenda to be radical? Or can a deconstructive approach to subject-matter be even more radical by its wish not to comply?

One thing is certain, in arts just as in politics, the will of individuals is capitalized upon. This renewed faith in the potential of individual actions is conveyed in political speeches in a novel way. Agency is the leitmotif of the ethics and aesthetics of the Sixties. How do politicians and artists impress on their audience a sense of urgency to act? How do these methods differ from previous avant-garde trends and oppositional politics? To what extent was it successful? Most importantly, has this attitude been able to outlive the “cultural revolution”?

In this paper I contend that the competing understandings of the inter-relationships between culture, art, socialism, apathy, commitment, and political action in 1950s Britain prefigure many of the key concerns about art and action which come to prominence in Britain and elsewhere in the (Second) New Left and the cultural politics of the later 1960s.
The Angry Young Men, on this view, provide an interesting point of comparison: while addressing many of the same concerns, this loose grouping of writers formulates a much more heterogeneous set of positions, including an important attempt to reconcile a heavily moral notion of “commitment” (to change) with an advocation of political inaction or withdrawal on the part of some writers.

Yasmina Shamma (Linacre College) ‘”Everything to Everybody Everywhere”: Frank O’Hara‘

Frank O’Hara led The New York School of poetry, an avant-garde movement based in New York City in the 50s and 60s. This school of poetry is most well known for its conversational anti-formal tendencies. My paper will look at some formal tendencies in O’Hara’s poetry, and the way that poetic form becomes a place to register impressions of urban, artistic, cultural and architectural forms.

Kate Soper (London Met.) ‘Aeshetics and Politics, 1960s and After’

At the heart of the issues we are addressing here is the contradiction between invoking art, or the aesthetic dimension, as socially redemptive, as a vehicle of revolution and reconciliation, and the persisting economic and social divisions that stand in the way of its fulfilling that role.

Looking at British experimental novels of the 1960s I take up the vexed question of the relationship between aesthetic radicalism and political radicalism where avant-garde theorist Peter Bürger left it. I suggest that instead of looking at the “work’s status”, we focus on the work’s phenomenology to reveal the workings of the “dissident reading” it purports to teach.

This short paper explores a selection of texts and images produced by gauchiste groups around 1968. It also sets them in a context provided by oral testimony from former activists, who reflect on the tension in their trajectory between political and lifestyle activism and ways in which this was played out in or constituted by texts and images.

This paper examines the ways in which some playwrights constructed different ways of performing ‘gay’ on stage in the 1960s. One is the well-known Joe Orton (1933-67) – still in print and still frequently revived; but the other two are not properly established in the histories that map representations of homosexuality in the period: Charles Dyer (1928-), whose plays, Rattle of a Simple Man (1962), Staircase (1966), and Mother Adam (1971) – construct a very different model of homosexuality and masculinity, both psychologically and linguistically; and the third is John Hopkins (1931-98) whose violent This Story of Yours (1968) and provocative Find Your Way Home (1970) offer further ways of performing ‘gay’.

In “The Assault on Culture” Stewart Home reviews and criticizes radical, utopian art movements from Lettrisme to Class War. Home’s study opens up new (postmodern) ways of thinking about the relationship between the institution of art and revolutionary politics.

This paper will explore how Lessing’s novel dramatises the attempt to understand both self and society, and how this understanding both precedes and itself becomes a form of action. It will also examine how novelistic form becomes caught up in this interrogatory process.

I will give a brief introduction to linguistic pragmatics, in particular to the theory of implicatures offered by H. P. Grice, by discussing a recent attempt to apply it to the interpretation of subversive music, more specifically Jimmy Hendrix’ famous performance of “The Star-Spangled Banner” at Woodstock in 1969.

Sylvia Plath’s work has been consistently situated in the realm of the personal, subsuming such related categories as the psychological, the feminine and the nature of illness. However, Plath’s use of the first person pronoun is never as straightforwardly personal as we might like to believe. An important context for the nature of the Plathean ‘I’ is an awareness of the nature of observation, of being observed and the powers of rhetoric. I argue that this comes from the cultural context in which Plath wrote and it is the purpose of this paper to situate the Plathean ‘I’ of “The Bell Jar” and her “Ariel” poems within that context; namely, the ‘terrifying’ and ‘mad’ cultural phenomenon of the ‘paranoid style’ of American cold war politics, in order to link cultural context to poetics. I will draw upon a small selection of Plath’s art work completed during the 1950s and early1960 in order to illustrate her
understanding of the pervasive fear of ‘The Other’ as her 1960 poem puts it, even within the blessed sanctity of home life.